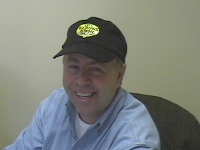 Mitch Schlimer’s entrepreneurial career began at the age of five, selling NYC-style pretzels from a street cart with his grandfather in Queens. After learning many invaluable “on-the-street” lessons at a very young age, Mitch spent the next three decades identifying voids and needs in the consumer marketplace, thus making him one of the nation’s leading serial innovators and entrepreneurs.

As a youth, tennis was Mitch’s passion, a game in which he excelled. His youth professional playing career was shortened by injuries, but this did not deter Mitch: with the same drive that has made him so successful today, Mitch became one of the nation’s youngest head tennis professionals. He was only 21 years old.

Mitch’s ability to coach and work with all levels of players and people became one of his strongest skill sets, both on and off the court. Before founding the Mitch Schlimer Tennis Centers in Houston, Texas, Mitch realized that many tennis students had difficulty fully understanding the spin of a tennis ball when it was hit; they failed to see the spin of the ball. Identifying a need, Mitch created the two-tone (orange and yellow) colored tennis ball, which is still sold in stores today, over 30 years later.

While operating Mitch Schlimer Tennis Academy and pro shops in the late 1970s, Mitch was robbed numerous times and experienced problems with his insurance companies when it came to receiving correct reimbursement. Because of his prior college education in television and radio, Mitch was familiar with video which, at that time, was a new medium being used solely for electronic gathering of news. Seeing a need and understanding the medium, Mitch created a comprehensive system that would video a home or business for insurance purposes. Realizing how this technology could help so many others throughout the world, Mitch retired from tennis and founded the nation’s first comprehensive video services company, which did video inventories, video yearbooks, video wills and depositions, sales and training tapes and much more. Eventually Mitch merged these unique service options with retail outlets and expanded the business through franchising. Today, many of the services Mitch created are standard business and household services.

In 1985, Mitch saw another need in the world marketplace, this time for a full-service marketing and communications company, consultancy and video production division specializing in entrepreneurial companies who were expanding through franchising. From 1985 to 1991, both his companies Impac International and Impac Productions were retained by such companies as Blockbuster Video, Dunkin’ Donuts and hundreds of others throughout the world.

Over the years, Mitch hosted “Franchising Today,” an hour-long television show that aired on the cable channel Lifetime. He also produced and directed “Franchise Explosion,” an award-winning, how-to video on the franchising industry. During this time, Mitch met and developed relationships with some of the nation’s greatest entrepreneurs including Fred DeLuca, founder of Subway; the late Anthony Martino, founder of AAMCO and Maaco; Bud Hadfield, founder of Kwik Kopy; and the late William Rosenberg, founder of Dunkin’ Donuts.

All along his journey, Mitch felt that entrepreneurs needed a voice and that the market would benefit from a radio show dedicated solely to entrepreneurship. But life is never predictable and in 1991, Mitch retired and returned to his childhood home to care for his aging parents, particularly his father who had cancer.

In late 1993, Mitch returned to work after learning some very valuable lessons about life during his special time with his family. He renewed his mission to provide that much-needed voice for entrepreneurs and created and launched a national radio talk show entitled “Let’s Talk Business.” Completely dedicated to entrepreneurship, small business and franchising, through this radio show Mitch interviewed some of the greatest entrepreneurs of our time including Sir Richard Branson, Ben & Jerry founders Ben Cohen and Jerry Greenfield, Fred DeLuca, the late Anita Roddick (founder of the Body Shop) and more than 400 other business leaders. Considered the “voice of entrepreneurship” and the “entrepreneur’s entrepreneur,” Mitch has been featured in the New York Times, Wall Street Journal, Newsday, Success Magazine and on CNN and other media venues during the last 30 years. He was also voted one of the 100 most important radio talk show hosts in America by his peers; more than 4500 radio hosts were in the running.

Due to this great radio show success, the “Let’s Talk Business Network” (LTBN) was born and nearly 20 years later, Mitch continues fulfilling his mission of providing a voice for entrepreneurs which includes the relaunching and airing of “Let’s Talk Business” on March 13, 2011. Chairman and CEO (Chief “Edutainment” Officer) of LTBN, Mitch felt there should be a place that would both recognize the great entrepreneurs from around the world and provide an educational vehicle for the nation’s youth to learn from these great entrepreneurial journeys. With this, ten years ago Mitch founded the Entrepreneurship Hall of Fame (EHOF). Currently an Internet-based venue, Mitch’s vision is to create and build a physical facility and museum similar to existing halls of fame (e.g., Baseball). In late 2009, Mitch began making his dream come true; working from offices in both Long Island and downtown Atlanta—a potential future home of the EHOF—Mitch is focused on making this great building an “EPIcenter” for Entrepreneurship, Philanthropy and Innovation, especially for the youth of this world.

Besides focusing on the EHOF, Mitch is the co-founder of the Magic Wand Foundation.
Based in Atlanta, this wonderful organization “empowers youth to live their dreams”. Mitch is also an accomplished photographer, and in 2009 had a one-man exhibit called “Awakening” which featured 150 of his photos from all over the world.